As an outdoor sports photographer, I’m consistently forced to work in harsh environments. I’m constantly trashing my gear and am always on the lookout for a good new replacement to what I currently use. So when REI emailed me about testing the new Gregorio ThermoBall™ jacket from The North Face, I thought, “why not?”

I took the Gregorio out with me on the first two days of my winter this year. The Pacific Northwest had just been pummeled with three feet of snow over the course of three days, with cold temperatures and high winds. A great opportunity to put this coat to the test and see how it holds up in real working conditions.

But before I get to how the jacket performs, let’s take a moment to go over my first impressions of the Gregorio from the moment I took it out of the box. The jacket is very heavy duty. The HyVent® waterproof, breathable fabric that the outer shell is made from feels durable without being overly course or stiff. I’m always a fan of a coat that moves well and doesn’t chafe around the neckline. The Gregorio delivered nicely in this department. Then there’s the overall weight of the jacket itself. It’s not lightweight. Even the shell by itself feels heavy when compared to a comparable 3-ply shell. This personally doesn’t bother me, though, as I am not much of a mountaineer. I’m hardly the type that cuts the tags from their clothing to shave off  half an ounce. That said, if you are that person, this coat may be on the heavy side for you. But that weight does come with a benefit, and that’s warmth. The shell by itself is plenty warm, but leave in the zip in/out ThermoBall PrimaLoft® liner jacket and the Gregorio is a heat blanket.

Moving beyond the initial look at cut, feel and weight, let’s look at the details and features. The ThermoBall liner is integrated nicely into the shell. It locks into place by zipping to either side of the shell, and has three button points to tack it into place (on both sleeves and the back of the neck). The liner can be worn by itself and the fit of it is well thought out. But leave the liner in and it integrates seamlessly as one piece. I didn’t even know it was there the first time I tried it on.

Aside from the lining, we come to the shell of the Gregorio. It features all of the attributes I look for in a winter mountain jacket. Hood, powder skirt, interior lining, and pit zips. Each of these features shows great attention to detail. The hood zips on and off easily. The powder skirt has a storage option to keep it out of the way when not in use. The zipper pulls are all easy to reach, slide nicely and don’t bind on themselves. 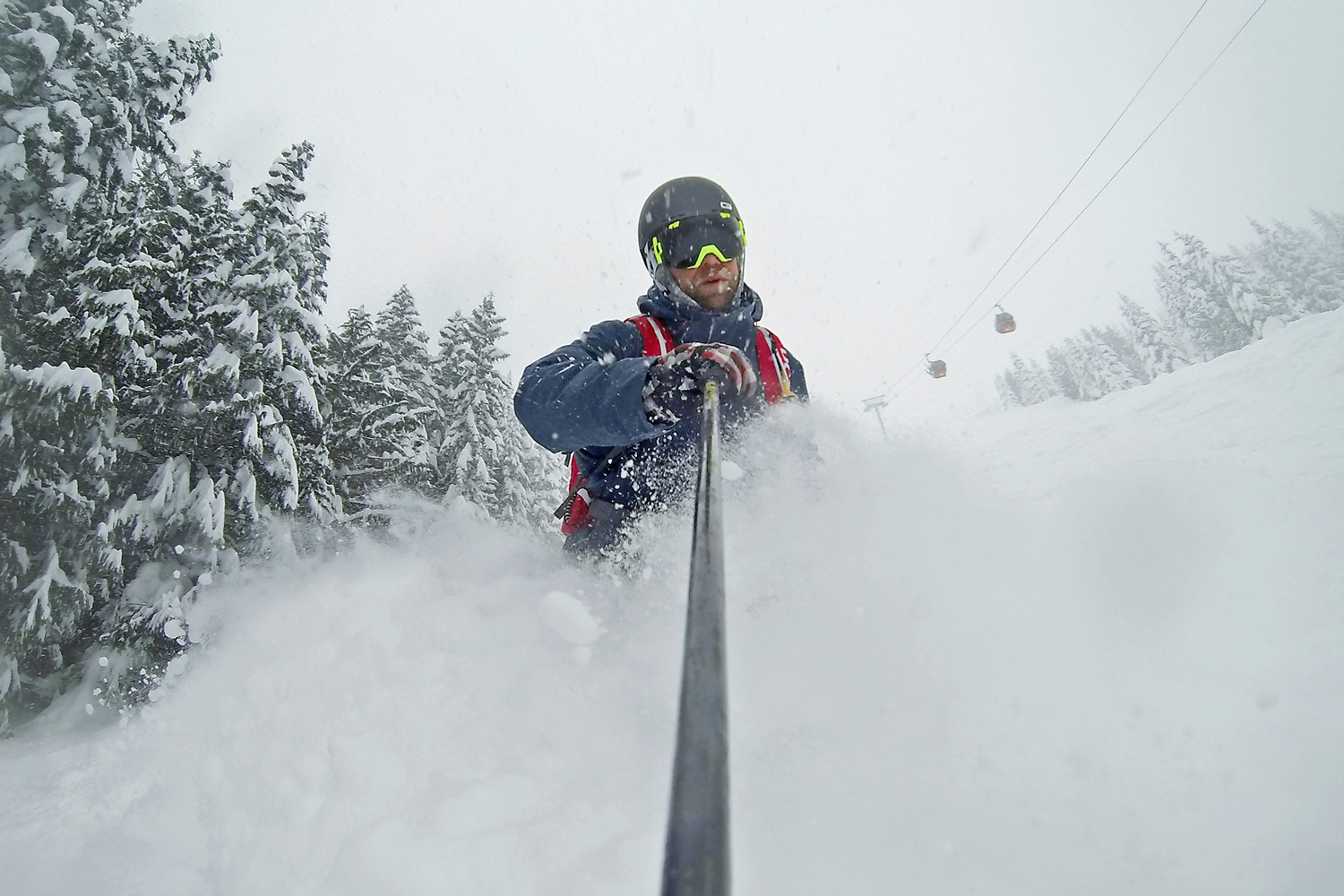 Ok, enough fluff about the details of the Gregorio—you can get that by looking at a spec sheet. The real question is: How did it perform? Over the two days I tested it, the 3-in-1 handled incredibly well. My testing days were particularly cold, so I left the liner in. The entire setup kept me warm throughout the day even with temperatures in the low 20s. Additionally, the waterproofness of the coat worked fine. I’m usually a die-hard Gore-Tex® fan when it comes to my waterproof outerwear, but the HyVent performed just fine in the conditions I was in. I do wonder how it would hold up though on those 34-degree days when the snow is more like rain. But it’d be perfect the colder Colorado, Utah or Montana ski days.

As I alluded to earlier, the Gregorio moved nicely with me, didn’t ride up or twist, and didn’t bind or chafe around the neck (this is a pet peeve of mine and I will write off any coat that does). I did notice a nice little surprise when I was looking for a pocket to put my season pass in. The pocket on the wrist of the left arm has a built-in goggle chamois attached—a nice-sized one at that. This is an awesome feature for those storm days when everything gets wet or foggy. Other than that wrist pocket and two hand pockets, the only other exterior storage option was a tiny chest pocket. As a photographer needing to quickly stow small items (lens caps, batteries, etc.), I’d prefer more pockets. But that’s not a deal breaker.

The only other real negative I could find with the jacket was the simple button attachment between the ThermoBall liner sleeves and the shell. I found that whenever I pulled off the coat, at least one of the arms of the liner would pop their button and the lining sleeve would come out of the shell sleeve. Perhaps a heavier-duty snap closure could fix this?

All in all, though, I was very impressed with this shell/liner combo. It handled incredibly well on two blizzard days in a very rough environment. Its shortcomings were very minor and were more personal qualms of a picky photographer than something to be concerned about. Considering its price point coupled with the lifetime guarantee The North Face has on their products, I would highly recommend the Gregorio ThermoBall Triclimate 3-in-1 to anyone on the market for a new ski or snowboard jacket.