Size matters when you’re into outdoor activities that require big gear and you’re tight on storage space. Kayaks have been notoriously cumbersome and difficult for leisurely travel–especially solo–until now.

As a native Floridian, I am most in my element when there’s water involved. I grew up boating, paddling and surfing–but as I grew older, I traded my aquatic hobbies for activities that involved more portable gear I could stash in my hatchback or carry easily on long trails. Kayaking quickly became an activity solely attainable during trips to my hometown or on special occasions when I splurged to rent one. My lifestyle simply didn’t fit paddle sports anymore–until I met the Oru Beach kayak. 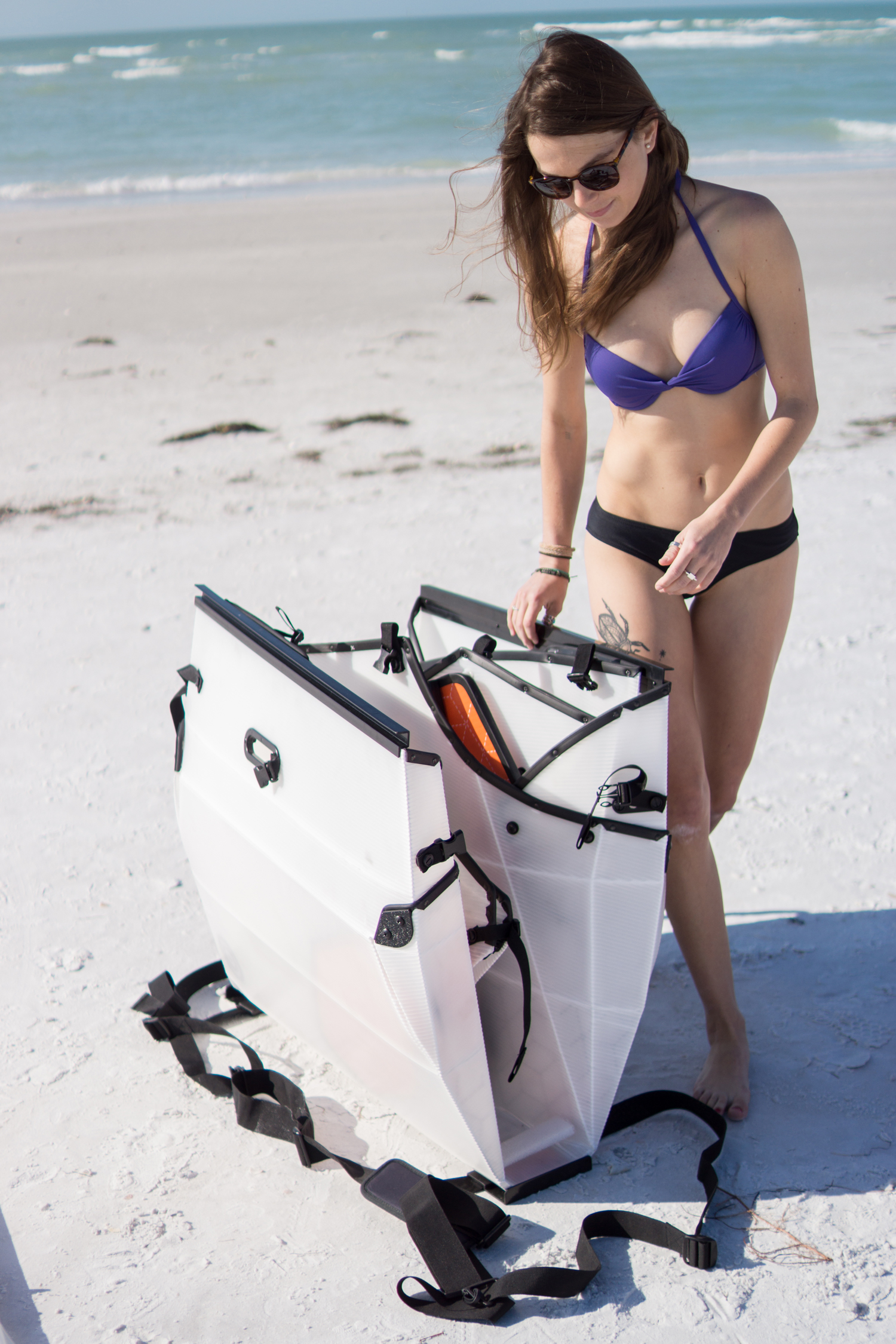 The gist is simple: This kayak ingeniously folds up and becomes a portable box with a shoulder strap, easy to carry short distances and store anywhere. The vessel is made from a custom polypropylene and is rated for 20,000 folds. You can toss it in almost any car, hike it into remote places, and keep it stored in even the smallest of apartments. As a full-time traveler who has to fit all of my belongings and gear into a single vehicle as I explore the country, the ability to bring a kayak on my adventures is a game-changer.

I took the Oru Beach on its maiden voyage down to Florida for a weekend of sunshine, sand and saltwater. An attempt was made to go into the experience without any expectations, but I caved and spent a few hours researching feedback on other Oru models from gear testers and consumers. 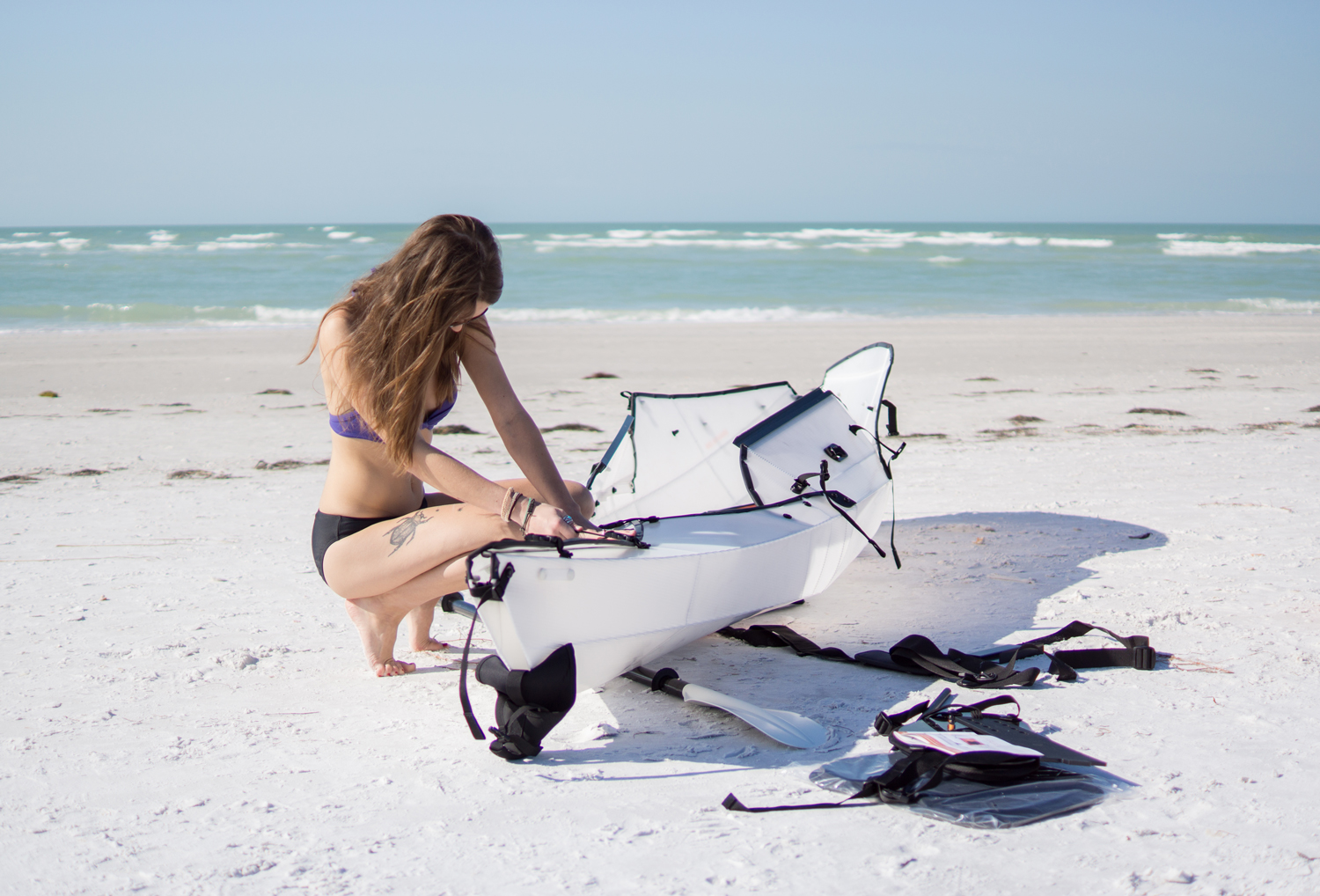 On a stubborn whim, I opted to wing it the first time I put the kayak together, and it didn’t end well. It took me over an hour to unfold and assemble, combining a hardheaded lack of no-brainer folding techniques with endless curiosity and questions from onlookers. On the next outing, I first read the easy instructions and it only took 10 minutes to go from backpack to water-ready kayak. Here’s a little pro tip: Read the instructions, and pay attention to the word “twist,” especially during disassembly. Taking the kayak apart and folding it up can be accomplished in under five minutes. 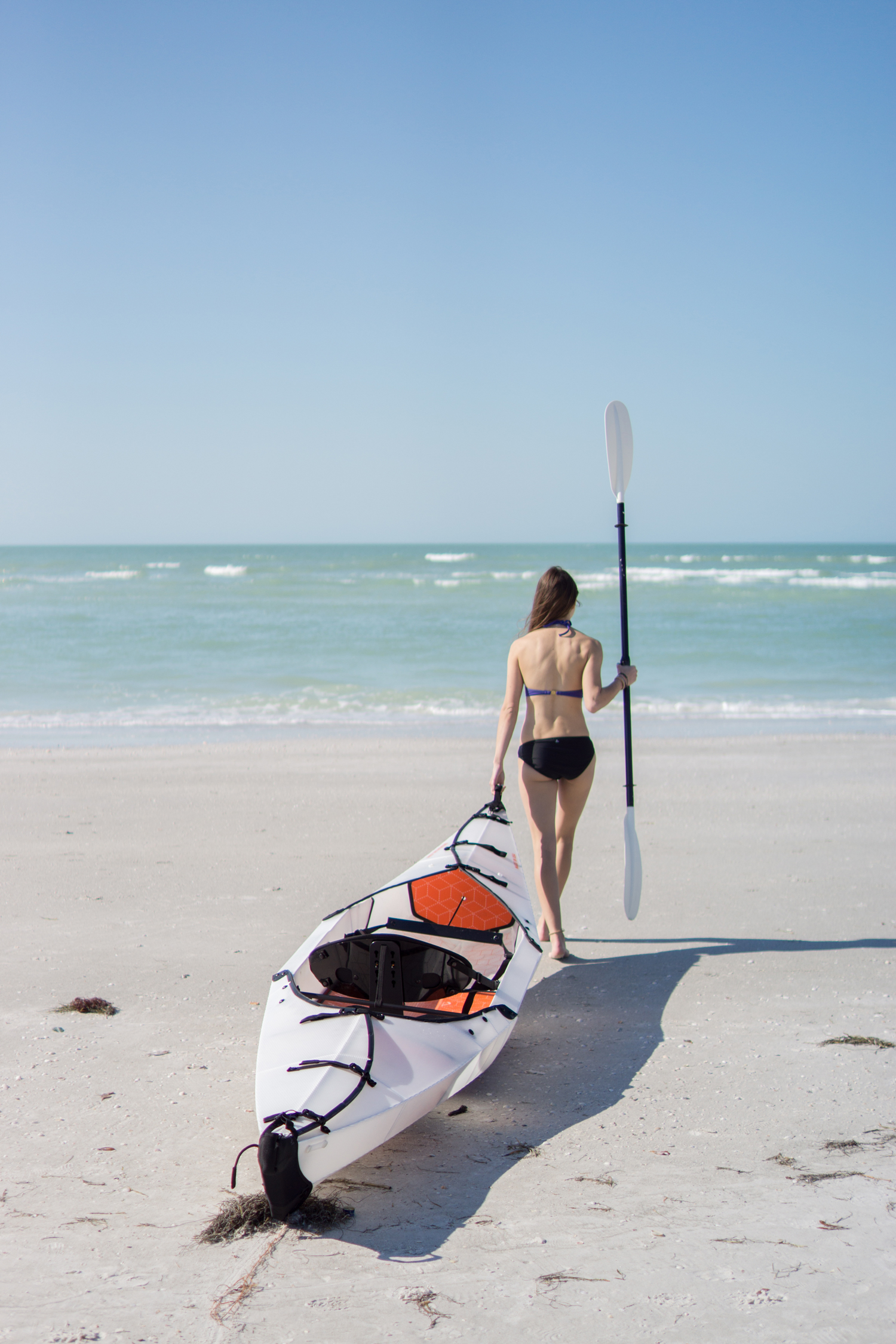 Put-in was a breeze. Where I anticipated wobbling, I was instead greeted with an easy, balanced entry and smooth push-off into the water. Paddling flowed smoothly, and the kayak glided powerfully through the open channel. It was tricky to navigate narrow mangrove tunnels, as the kayak isn’t built for hairpin turns, but the boat’s body seemed unphased by my rough handling. 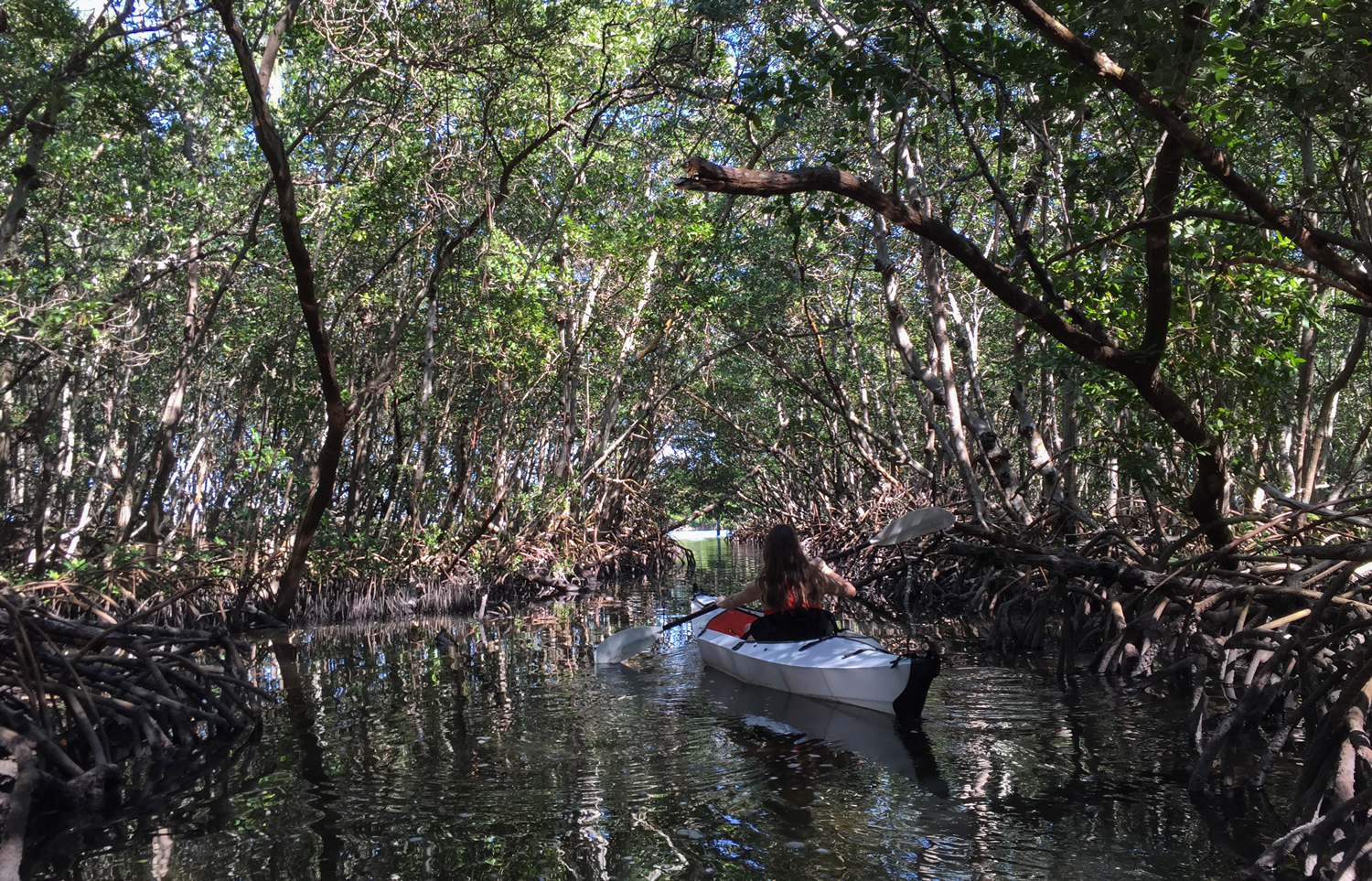 I expected the kayak’s softer plastic body to sustain noticeable damage from the relentless assault of mangrove roots and being dragged through creeks while paddling around Lido Key in Florida, but it held up well through a variety of beatings. The Beach was made for leisurely cruises in relatively calm waters, and the quality of the build means it will serve novice kayakers just fine as they learn the ropes of paddling. I hauled the kayak through muddy meadows and crashed it into sunken logs and limestone walls–and dropped the pack a few times–and it’s still in one piece. 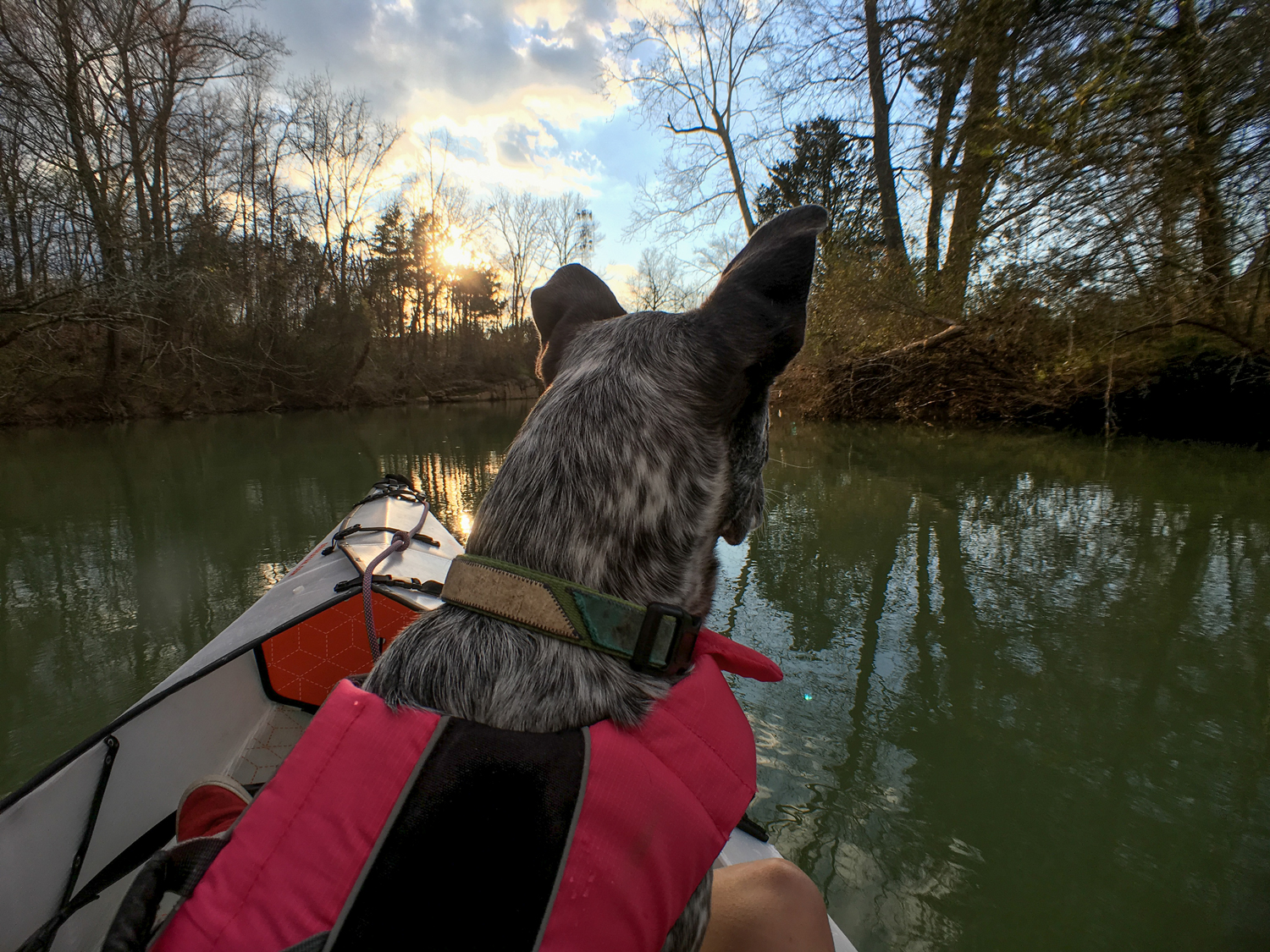 The Beach model, with its easily accessible open cockpit design, is Oru’s most causal design, making it a fantastic experience for any user. The layout is particularly appealing for those with adventurous canines–I was able to coax my 40-pound dog into the kayak with me during a trip to Chickamauga Creek in Georgia, and she loved being out in the water while still being able to sit in my lap and move around a bit. 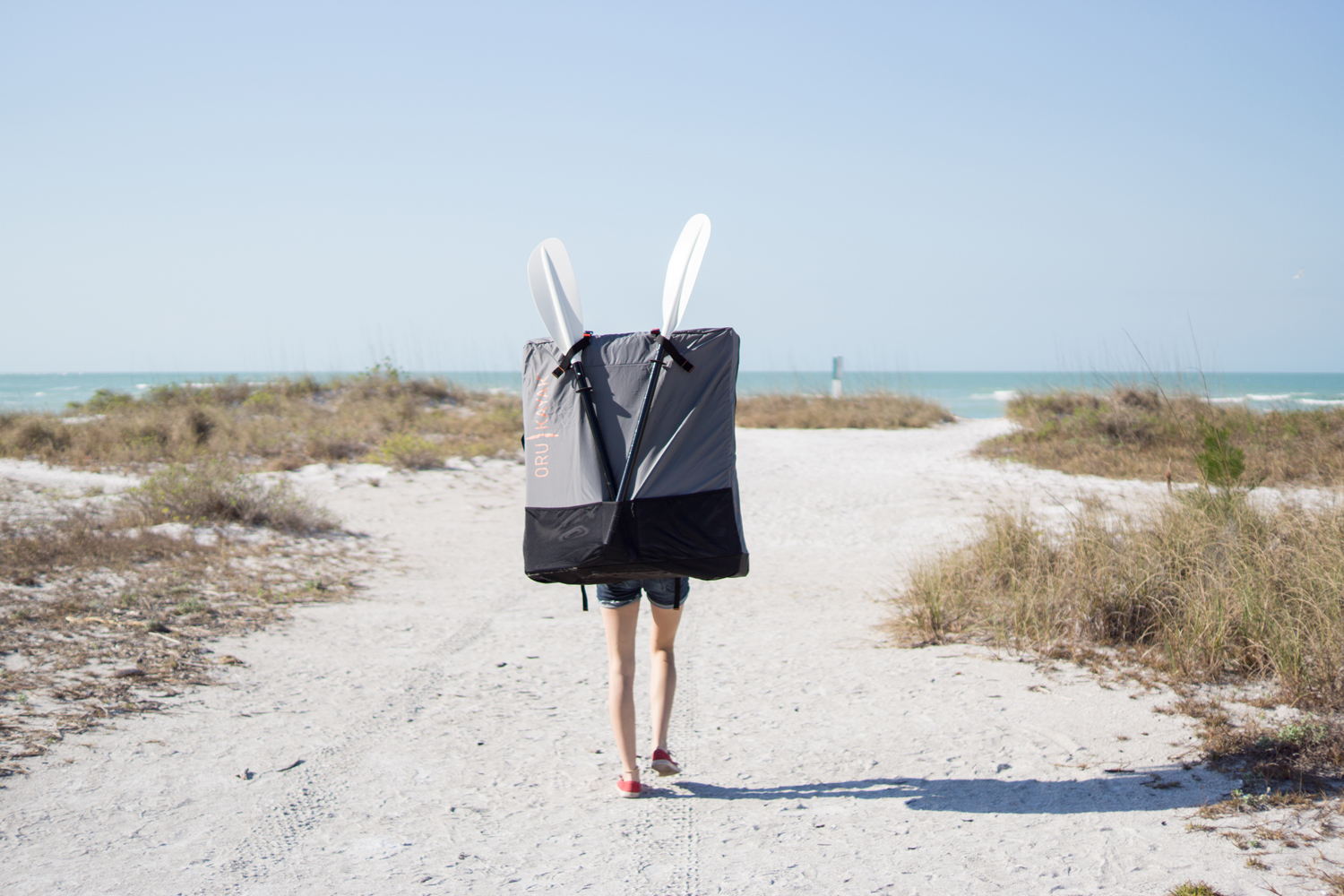 If you intend to take the Oru Beach quite a distance from your car to put-in, you’ll likely want to get the heavy-duty nylon backpack (available separately) that allows you to carry the folded kayak longer distances. As a climber, I was instantly reminded of the way one carries a crash pad–it’s bulky and a little awkward, but the backpack-style straps are an unbeatable mode of transport for big recreational equipment. The sternum and hip straps added stability and made it manageable for my small figure to support the load. The kayak itself weighs roughly 23 pounds.

My only shame is not developing a habit of cleaning the kayak after every use. Once you fold it up, it’s hard to muster the energy to unpack, rinse it off, and put the kayak back together after you’ve boxed it. I noticed it starting to get undeniably dirty from an accumulation of beach sand and creek mud after a few trips. Oru kayaks naturally lend themselves to paddling at off-the-grid destinations, so readily available cleaning isn’t usually an option. When I did finally give the Beach a bath, a simple strong rinse was all it took to get the kayak back in pristine condition. 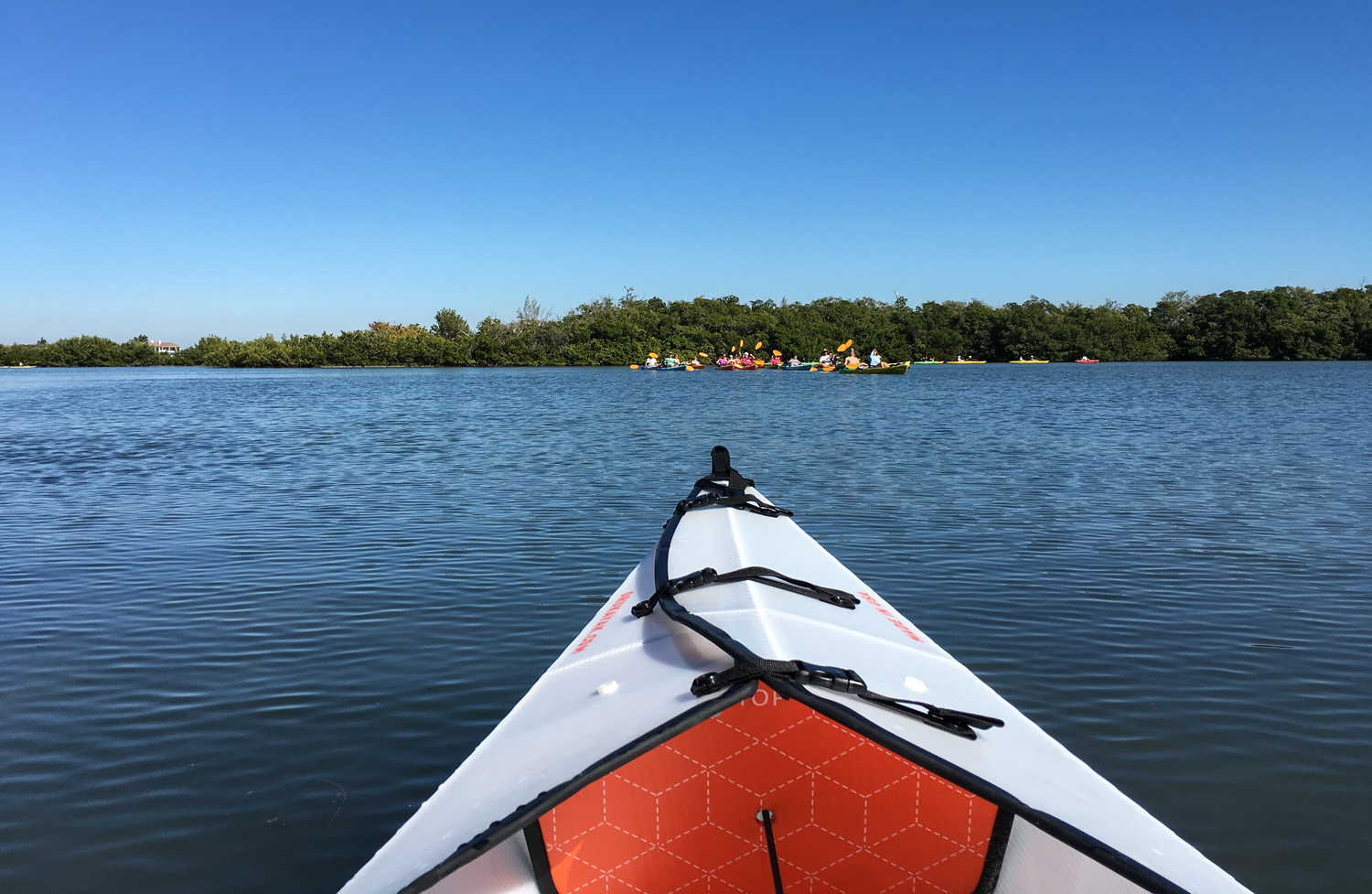 The Oru Beach is revolutionary for outdoor travel. Its unrivaled packability makes paddling accessible to adventurers who must pack light and be mindful of storage space. I live on the road, and have been able to easily transport it from Tennessee to Florida to New Mexico. Though a bit pricey, I even mailed the kayak to myself once in lieu of strapping it to the top of my Subaru. Fellow full-time travelers have reported no issues with checking their kayaks as luggage on flights. 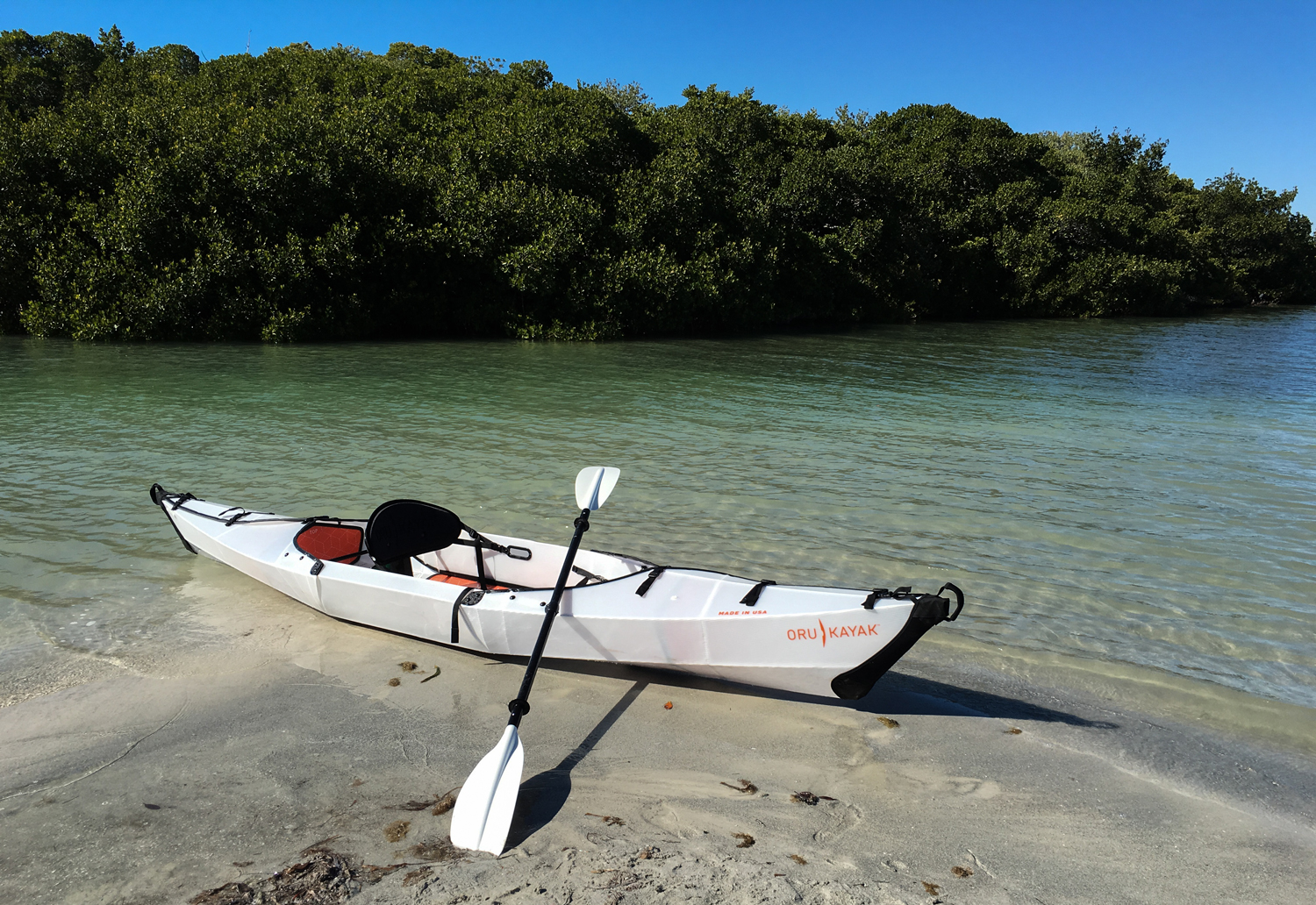 Overall, the Oru Beach kayak is a product I would highly recommend to anyone willing to splurge on a quality piece of gear that will elevate adventuring to the next level. It’s easy to use, fast and strong. For the solo traveler, this kayak’s convenient handling and versatile capabilities make it the perfect companion.