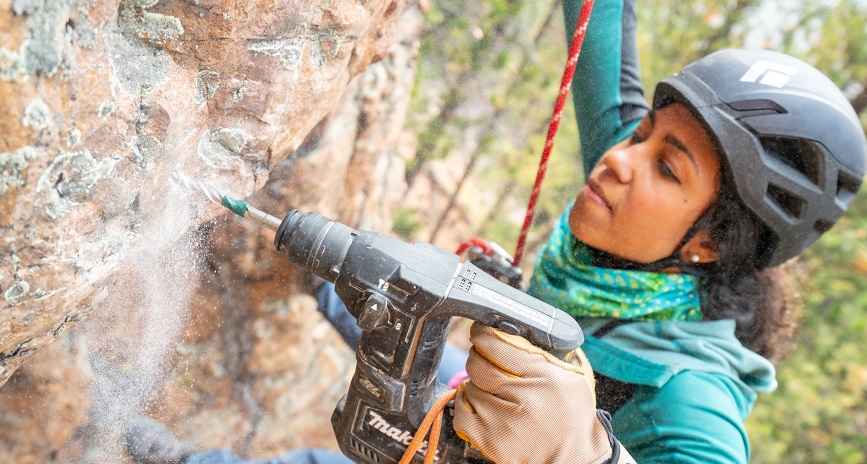 Marmot, in partnership with REI Co-op Studios and Bedrock Film Works, releases “What’s In A Name,” a short film directed by Jules Jimreivat, chronicling the spirit and triumph of muscling through the challenge of route development in a sport whose practices have created barriers to access, safety, and belonging among underrepresented groups.

After immigrating from Brazil to the United States as a teenager, Maiza Lima worked to find her place in American culture and climbing. Now living in rural Montana where she is one of the only female climbers in her town, Lima has come to realize there are many parts of climbing culture she does not want to conform to. She discovers that she must define her own portion of American climbing, community, and place to make more space for people like her.

The film will be available at noon PT today on REI’s YouTube channel on at https://www.youtube.com/c/rei, and on Marmot’s Instagram at 9 a.m. PT on 10/27 https://www.instagram.com/marmot/.

“Growing up climbing, I had few female role models to look up to. My coaches, bosses, local climbing ‘crushers,’ all were male. On top of that male-dominated culture and the list of route names for popular climbs, the sport can feel unwelcoming and even unattainable for so many,” said Jul Jimreivat, film director. “I chose to direct this film because I want that list of names changed to encourage more inclusion of women and BIPOC in the sport of climbing. We've made a film dedicated to telling the story of an incredible woman, climber, and immigrant as she finds her place in American climbing culture.”

“The decision to partner on the film was an easy one. Maiza’s story is one that needs to be told and Jules and the Bedrock Team were the perfect fit for the project. Marmot is honored to take a stand with Maiza and our film partners against racial and gender exclusivity in American climbing,” said Jeff Brandon, Marmot’s brand marketing manager. “For some, this will be the beginning of an essential dialogue and for others it will be a valuable continuation. Either way our goal is the same, we want to facilitate constructive conversations and participate in the solution.”

“This film engages the climbing community and continues a critical conversation about how together we can build a more inclusive future for our sport and those who love it,” said Nicole Browning, REI inclusion marketing manager. “Part of that work is co-creating a solution to end derogatory route naming for good, and by addressing the issues within the climbing culture that have enabled it.”

REI supports Climb United, an initiative led by the American Alpine Club that has convened climbers, climbing organizations, and industry brands to address harmful route names and ultimately transform the culture of climbing to create a more welcoming, safer environment for all climbers. This film complements REI’s goal to prioritize storytelling from BIPOC, LGBTQ+ and other historically underrepresented communities and groups, as well as stories that reflect the human impact on and opportunity to protect the environment.

About Marmot Mountain, LLC
Marmot is an award-winning, globally distributed brand of high-performance, technical clothing, apparel and equipment. Since 1974, Marmot products have been worn by climbers, skiers, mountaineers and adventurers world-wide. Marmot works with professional mountain guides, world-class athletes and expeditions—pushing the limits of product innovation and technology— pioneering what is possible in the most extreme environments on earth. For more information about Marmot please visit www.marmot.com.

REI is a specialty outdoor retailer, headquartered near Seattle. The nation’s largest consumer co-op, REI is a growing community of 21.5 million members who expect and love the best quality gear, inspiring expert classes and trips, and outstanding customer service. REI has 179 locations in 42 states and the District of Columbia. If you can’t visit a store, you can shop at REI.com, REI Outlet or the REI shopping app. REI isn’t just about gear. Adventurers can take the trip of a lifetime with REI’s active adventure travel company that runs more than 100 itineraries across the country. In many communities where REI has a presence, professionally trained instructors share their expertise by hosting beginner-to advanced-level classes and workshops about a wide range of activities. To build on the infrastructure that makes life outside possible, REI invests millions annually in hundreds of local and national nonprofits that create access to—and steward—the outdoor places that inspire us all.