Camp Site Luxury Items: Shoes and Chairs....What do you have and why????

I’ll start off by saying that I yearn for a solid campsite after a long day of hiking. This is probably one of the main drivers for me to go on extended backpacking trips….getting to experience a variety of really cool set ups with my gear along with stunning atmospheres the trail can provide.

I do tend to be weight conscious when on the trail, and I can achieve a 10-12 pound base weight —depending on the weather conditions- without food and water. With this said, I tend to make some weight sacrifices for luxury items while I am at camp.  One of these sacrifices is my hummingbird hammock.  Although it is only 7 ounces, it does not contribute to my sleep system and only used for relaxation purposes after a long day.  Another item I am looking to sacrifice some weight for is an ultralight pair of camp shoes.  I do enjoy getting out of my grimy trail runners and letting my feet breath, but I haven’t found a pair of camp shoes that I am completely sold on.  Below are my top 3 contenders:

Originally, I loved the idea of the Xero Genesis because of they are sum 10 ounces and their packability (they can roll up).  However, I recently discovered the HeyDude shoes.  Their website claims the total weight is FIVE OUNCES, but I find that hard to believe….5 ounces each is more realistic in my opinion.  Although HeyDude is not an outdoors company, these are close toed shoes that I can wear socks with vs. the Xero Genesis sandal.

Superuser
6 Likes
Reply
Sorry, either you cannot reply to this topic or you have not verified your email address by clicking on the verification link in the email we sent you when you registered. If you did not receive an email from us, or need us to resend it, please visit your User Profile page.
22 Replies

All- I’ve recently discovered the Exped Camp Slipper. This also seems like a viable option at 7.4 Oz, but I question the durability compared to the Xero Genesis and HeyDude.  Man though, if those HeyDudes are really 5.5 ounces it is a no brainer! 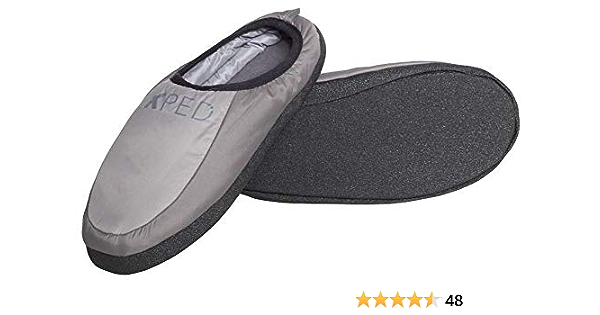 Never bothered with a chair.  There is always a rock, a log, or the ground,  For stream crossings I prefer trail runners or equivalent and let theme dry - keeps them clean as well.

Gosh, I'm afraid I'm going to be completely useless to this conversation!  I don't carry camp shoes when hiking;  instead, I change socks at the end of the day, hang up the ones I was wearing to dry and air, and loosen my trail runners so that they're almost as loose as slippers.  I probably should carry them, though.  I've twice lost the sole of a hiking boot!  Naturally, I was miles away from anything, and I hadn't realized that the magic of duct tape carries over into hiking.  Made for some sore feet by the time I was able to get back to the car, or a place to get new shoes.

This was on my second trip on the AT, Woody Gap to Unicoi.  Still using my old hiking gear from Boy Scout days then!  Check out the old rag wool socks.  No duct tape, but did have some medical tape.  Worked for a while.

And once again!  This time, I was going from I-40 to Erwin.  and stupidly, still no duct tape!  Never again!  Happened late morning the second day, after I'd gone over Snowbird Mountain, and down to Groundhog Creek Shelter.  Turned around, hiked back to my truck, and circled around to Hot Springs for new shoes.  Before getting back, I'd lost the soles of both boots, the stiffening thingie inside, and all the padding except the insole.  Basically, all but barefoot!  *sigh*.  I did manage to collect and carryout almost all of my detritus, but missed one of the stiffening thingies, which unfortunately I never found.

I've begun to think a second pair might be a wise idea.  Oddly, this morning I put on a pair of Redwing boots (both steel toes and shanks!) my company got me even though I was mostly office-bound.  They've been sitting in the box mostly unused for a while, so I though I'd use them for mowing.  The soles on each boot crumbled into a hundred pieces!  Maybe I have a superpower I didn't know about!

Can't help much with camp chairs.  I don't even carry a sit pad, although that's going to change if I ever get to hike again.  *sigh*

So, as I said, no help at all.  But hopefully I've entertained while wasting your time!

Retired medical technologist and engineer
REI member since 1978
Superusers do not speak on behalf of REI and may have received
one or more gifts or other benefits from the co-op.

I take sandals. Used for river crossing more than camp shoes.  I use xeros but not those ones, I think.  Don't like their velcro fastener but they are quite light and comfortable enough to hike in in an emergency and I can wear them with socks if it is cold.  I don't consider them a "luxury item".

Don't take a camp chair.  I will be taking a 1/8 inch foam pad both to underly and protect my inflatable from puncture and for use as a day time flop mat. Not a "Luxury Item" either.

I considered the flexlight and chair zero but I did not find them comfortable enough to be worth the money.  If I was taking a trip where a chair would get a lot of use I would not have a problem carrying one.

I'm not big on the whole concept of "Luxury Item" personally.  If you use it, its not really a luxury item.  What makes sense to take depends on the objective of the trip and what weight you are comfortable carrying.  If you are a long distance hiker and want to make big daily miles it make sense to see what you can do without because you want to carry as little weight as you have to. Otherwise you just don't want to overload yourself with stuff you won't use and all the stuff you carry should have a definate purpose and be worth the effort to you to carry it for the particular trip.

Now, as I’ve stated on other posts, I struggle with getting pack weight down.  So I am the opposite of someone to take advice from.  But Crocs.  11.4oz. And I’ll never forget them at a campsite 🏕!

Since I know everybody has been waking up in the middle of the night wondering if the 5.5 ounce TOTAL WEIGHT of the Hey Dude shoes has been de-bunked.....yes, yes it has. I had a friend weigh his Hey Dude shoes and EACH shoe weighs 5.5 ounces. Close, but no cigar.

I, for one, will sleep better tonight knowing this information.

@REI-JohnJ Haha! Good. I knew SOMEONE would value this critical and time sensitive myth buster classic.