Turn on suggestions
Auto-suggest helps you quickly narrow down your search results by suggesting possible matches as you type.
Showing results for
Show  only  | Search instead for
Did you mean:
Sign In
Sign In Create an REI Account
Help
Announcements
Welcome REI Co-op Members! We're glad you're here. If you can't access the Co-op Members section of the community, click here for instructions on how to join the section that's just for you.
Topic options

I do not like seeing REI boycott Facebook ads for allowing hate speech. Sure this sounds awful to say. I certainly do not condone hate speech. But the alternative is you are requesting FB censorship by some arbitrary group pf people. How do you know they will censor what you believe is hate?

If this is conversation board is inappropriate for this discussion, please route me to the proper channel.

Free speech please, even if it hurts, because the alternative is worse.

zanemorris
Casual Visitor
14 Likes
Reply
Sorry, either you cannot reply to this topic or you have not verified your email address by clicking on the verification link in the email we sent you when you registered. If you did not receive an email from us, or need us to resend it, please visit your User Profile page.
26 Replies
In response to Philreedshikes

@Philreedshikes you can read a bit more on the discussion folks are having about #StopHateForProfit in this thread here in the community, including REI's actions.

@REI-JenK Thanks.  My goodness, you have a no-win situation on your hands!

in the army I once heard a saying ‘That arguing with an infantryman was like mud wrestling with a pig, everybody gets dirty, but only the pig likes it“

I agree with Zane.

I'm certainly not particularly a fan of Facebook or social media generally.

Boycotting FB in this instance strikes me as just so much "woke posturing".

I am libertarian in outlook and a long time outdoor enthusiast (REI member since 1988), and am very disappointed with REI's stance on this.

You can do better. Please do so.

As a member for almost 40 years, I applaud REI's decision (along with North Face and Patagonia) to boycott FB adds due to racist/hate speech which is prevalent on that platform.

"Categories of speech that are given lesser or no protection by the First Amendment (and therefore may be restricted) include obscenity, fraud, child **bleep**ography, speech integral to illegal conduct, speech that incites imminent lawless action, speech that violates intellectual property law, true threats, and commercial speech such as advertising."

While I do appreciate the opportunity to keep in touch with friends, FB in my experience can be a cesspool of misinformation, hate speech, and racism. Sometimes posted by individuals, and often by organizations.

REI is a company, which can choose where it's adds are seen - and what kind of a message it is associated with. We are consumers and can choose where we spend our dollars. You have that freedom. My spending will continue to be with REI, a company that has always in my experience acted with integrity and honesty.

Companies like FB depend on large companies like the mentioned Patagonia, REI and North Face, because the cost to end users is nothing. So, for companies like this to use their pocketbooks to force the hand of social media sites, to censor free speech or should I say political speech shows the true bias Americans are tired of. Maybe FB and other socialist media sites should be made utilities, thus eliminating the need for any of them to depend on companies wanting to advertise their products. Sounds like a win win for helping to curb political bias from socialist media and corporations looking to steer America their way! https://www.youtube.com/watch?v=toQKRKPw6QU 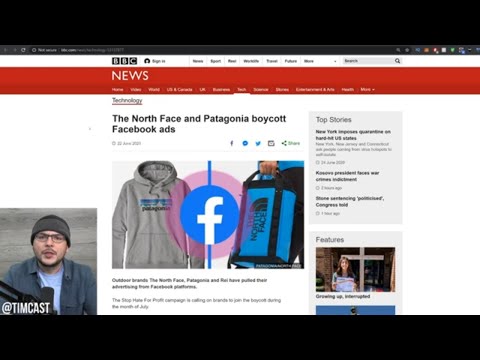 Facebook Adpocalypse Is Coming And Censorship Will Get WAY WORSE
youtube.com/watch?v=toQKRKPw6QU
SUBSCRIBE TO MY MAIN CHANNEL - http://Timcast.netSupport My Work - https://www.timcast.com/donatehttps://www.youtube.com/watch?reload=9&v=WUo08MFf7ZsBuy stuf...

Thank you for sharing. I agree. I have a very low opinion of Facebook. I deleted my account a few years ago because it's basically a sea of garbage.

If REI wants to pull their advertising because they see them as a low quality publisher then that's fine. But please do not pull your advertising to loudly and publicly call for censorship.

Freedoms are precious and should be used RESPONSIBLY! Many Americans, including my family, have died to protect these freedoms. Rather than an unelected dictator telling you how it will be, we have the ability to (vote and to) voice our opinions on various platforms including Facebook. Remember that Facebook is immune from liability from what they print. Television, Newspapers, and other periodicals would end up in jail for the junk posted on Facebook. Facebook is no more than a profit earning corporation. REI is a profit driven corporation but has "guiding principles".

Just because you are free to hate, intimidate, use vulgar language, or deny equal rights to another American doesn't make it right. When one American suffers, we all suffer. I'm glad that my purchases aren't supporting a platform that allows hate speech.

What is truly sad, is that there are Americans who would choose to put that horrid language out and frankly even feel that way. Try love instead of hate.

It goes back to the "Golden Rule"..."Do unto others as you would have them do unto you"! How would you feel if you were on the receiving end of the horrible treatment that generations of our fellow Americans have suffered? How would you feel if you had no choice but to rely on the charity of others? If you never think about that...and  you shop at REI...and you regularly enjoy the outdoors, you are doing far better than many of your fellow citizens. An African American ran into problems recently for doing nothing more than bird watching because his skin is brown.

Take a minute to imagine that no matter how hard your work, you will never escape poverty. No matter how much you learn, opportunity will never appear because of your name. If you actually think about hiking in "their boots" for a day...it's TERRIFYING.

I don't want to anger any of you. You simply need to take a moment, breathe...and imagine if the boot was on the other foot. How would you feel? Would you not feel angry if for generations your family had been thrown the "table scraps" and denied opportunity no matter how hard you worked?

If REI believes that racism, **bleep**, hate, bullying, and vulgarness isn't a platform that they will choose to support with the profits of my purchases...I'm a lifetime supporter.

Facebook and REI are both corporations. After the Supreme Court 'Citizens United' judgement we now live in a world where corporations are "people". Given that court judgement, and if forced to choose between the two, I choose REI and their standpoint.

Thank you REI for being on the right side of history!

But who decides?
And...”no choice, but to rely on the charity of others?”  Beware the soft bigotry of low expectations.

Woody Harrelson did a movie some years back called “The People vs. Larry Flynt”.  It was a great movie about the first amendment and the profound effect even minimal restrictions on free speech can have.  One of his more famous quotes in that role was “If the First Amendment will protect a scumbag like me, it will protect all of you.”  While the Supreme Court has ruled that freedom of speech does not give you the right to shout fire in a crowded movie theater, it does give you the right to express ideas that others might consider reprehensible.  When we begin to identify hate speech, the speech is less important than the people who decide what hate speech is.  While you agree with those making the decision today once the precedent is established you may not like who makes that decision tomorrow.  Beware of giving someone that much power over what you can think.  The political pendulum swings and sometimes it swings wildly.